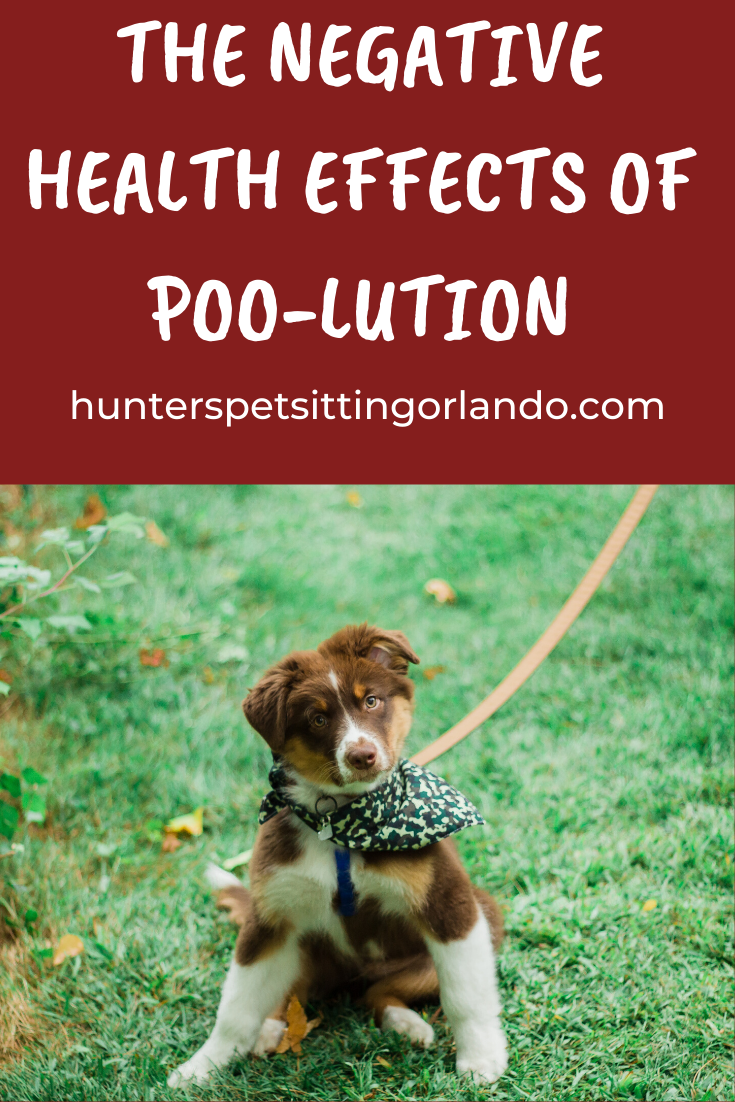 Be honest…do you pick up your dog’s poop once they’re done doin’ their business on your walks?

If you’re not, you’re directly contributing to a widespread public health issue, known as “Poo-lution”.

Picking up your dog’s poop may not seem like a big deal, but dog waste is an environmental pollutant. By leaving your dog’s poop on the ground rather than picking it up, it ends up washing into storm drains. Why does this matter?

Bacteria from animal feces causes pollution and a public health threat in bodies of water all over the state. Floridians are especially at risk. While all animals from farm animals to wildlife contribute, dog waste is the one factor of this that can be controlled.

So, why does poo-lution have such a negative effect on public health?

Water Pollution
As the feces lays in the grass and begins to decay, bacteria seeps into the soil which contaminates our waterways. It can also wash into storm drains, draining directly into local lakes and bodies of water. This has a direct effect on human health, wildlife, and the environment.

Reduced Oxygen Levels
Decomposition of pet waste demands a high level of oxygen from water, reducing the amount of dissolved oxygen available to plants and animals. The consumed oxygen releases ammonia, both of which are detrimental to the health of fish and other aquatic life.

Contains Pathogens and Bacteria
Dog feces contains bad pathogens and bacteria such as E. coli, salmonella, and giardia, which can cause health issues for humans.

Nanette O’ Hara, head of the non-profit Tampa Bay Esturary Program explained exactly how pet waste can spread. “Someone who steps in dog waste while walking barefoot is exposed to parasites that can cause roundworm or hookworm infection. But, there’s a larger problem. It’s either going to wash down into our groundwater over time, or when it rains it’s going to wash off the land and into the nearest waterway. Swimmers in contaminated water can get salmonella or giardia and fish die when the waste causes algae blooms that dissolve the oxygen supply,” she said (see sources for full article).

Wondering how you can help prevent poo-lution in your city?
Pick up after your dog, every day, every time. Carry plenty of bags with you or bring a scooper and dispose of it in the trash or by flushing it down the toilet!

As aforementioned, dog waste is the only form of animal feces that can be controlled. Be a good neighbor, and pick up your dog’s poop! It will result in a healthier city overall.

Perhaps one day, animal waste will be turned into a form of alternative energy. For now, bring some bags and pick it up!

There are affiliate links in this post. We make small earnings through any purchases made through these links. Thank you for supporting Hunter’s Pet Sitting!

This blog post was written by Kelsey Kryger. Kelsey is a fitness professional, writer, and social media manager. She has been a part of the HPS Team as their social media manager, blog writer, and pet sitter for nearly two years. When she’s not working on Hunter’s Pet Sitting’s latest blog post or sharing cute pics of furry clients, she’s hanging at home with her pup, Leo, and her kitten, Elvis!

previous
A Beginner's Guide to Dog Training - Tips & Resources for Training Your Pup!
next
Interview with Owner, Hunter Bonar